In a previous article, I went over the steps for cleaning bird poop off of a wooden deck. While this is a common problem for us and many others, it’s not the only place birds choose to do their business.

In fact, we deal with birds and their droppings considerable more in our driveway than on our back deck. As I’ve mentioned a few times in other posts, we live in an area with very few houses and lots of land, and as a result, we get to see a lot of wildlife, including plenty of birds.

Over time, I’ve learned from the past and rarely leave my car in the driveway because of all the bird poop. I’ve also implemented a few ideas to keep them out of the garage. Unfortunately, the methods in that article don’t necessarily work well for keeping birds out of your driveway as well.

With that being said, if you’re in the same shoes as us, you probably would like to know how to clean all that bird poop off of your concrete driveway, patio, and walk ways. In this article, I’ll go over exactly that. But first, let’s take a look at what’s actually in those droppings that you’re trying to clean up.

What you probably think is bird poop is actually a combination of bird pee and poop. Unlike us humans, birds pee and poop at once through a single exit (sounds convenient, doesn’t it?). The white part that you see is the pee (it’s technically uric acid, but you can think of it this way), while the rest is the poop.

Just like other animals, bird poop is essentially made up of bacteria and the digested and undigested food that birds eat. This often includes insects, worms, seeds, berries, pollen, and many other small items.

Bird droppings can also carry diseases, which is why it’s important to take precautions when cleaning up bird poop. Some safety measures to take when doing so are to wear gloves, a mask, and clothing that covers your skin.

How to Clean Bird Poop Off Concrete

Now that you know what you’re getting yourself into, let’s take a look at a simple step-by-step process for cleaning concrete covered in bird poop.

The first step is optional, but may be desirable, and that is to clean up the bulk of the dried bird poop. You can scrape up the droppings with a putty knife or something similar. The reason for doing this step is to cut down on the amount of poop that will find its way to the surrounding areas of your concrete during the following steps.

The next step is to use a hose to clean off as much of the debris as possible. For tough stains, consider using a power washes set to a light setting instead. If you’re worried about spreading bird droppings to the areas around the concrete, you can skip this step as well.

Next, put some liquid dish washing detergent on each of the bird droppings, grab a bristle brush, and use a little elbow grease to work the stains loose. Once done, you can either rinse the concrete with a hose, or move on to the next step for an alternative cleanup method.

If you don’t want to rinse the droppings into the surrounding areas, your best bet is to put something dry and absorbent down on top of the loosened droppings. For just a few droppings, you might be able to get by with either paper towel or a rag. For large amounts of poop, cover them in either cat litter or saw dust, wait a while, then use a broom and dust pan to sweep up the mess.

The method above should take care of most bird poop stains on concrete, but if not, you can retreat the tough stains with a chemical solution. If desired, you can create your own natural cleaner with household ingredients, but a commercial concrete cleaner (on Amazon) is a good option as well.

Like most people, we enjoy having birds around our house. However, no one likes seeing all that bird poop on their concrete driveway or patio.

While you can let nature work its magic by cleaning most of it off when it rains, that sometimes doesn’t happen often enough or doesn’t work well enough. When you want to take control and clean up the bird poop yourself, give the method above a try instead. 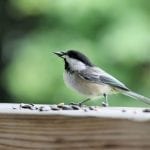 How to Effectively Clean Bird Poop Off of Your Deck 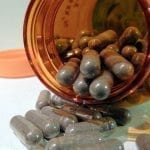 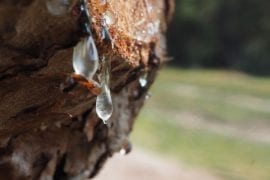